Common Injuries in MMA and What You Can Do About Them

“Fighting is like a game of chess, and you want to be playing with a full lineup of pieces.”

Gabriel is a sports physiotherapist based in Auckland, New Zealand. His credentials include a Bachelor in Health Science Physiotherapy, Postgraduate Certification in Sports Medicine, and Postgraduate in Western Acupuncture. He runs Physio-Logic, a physiotherapy company with multiple branches across Auckland. His resume of clientele includes multiple athletes from a wide variety of sporting disciplines including rugby, rugby league, motorcycle racing, triathlon, badminton, power lifting, strongman, jiu-jitsu, boxing, kickboxing and MMA.

“Fighting is like a game of chess, and you want to be playing with a full lineup of pieces.”

Being a fan of the sport, I have progressed from watching MMA with a thirst for brutality, to an admiration of the resilience showed, and then on to an analyzer of the chess game being at play. Let me walk you through how I got into the sport, and I am sure a lot of you will draw similarities to your own experience.

Let us be honest, when any of you fight fans bring a friend of yours who you are trying to introduce to the sport, the most appealing point you are trying to sell them is how brutal it is. A common response to a first fight can be along the lines of ‘is that move legal?’. How I got introduced to MMA was after watching a boxing fight between 2 famous heavyweights at the time. Their selling point was ‘if you think this is tough, you should check out MMA’. Back then, we had to wait for events to be live and head down to the local pub. Youtube and online videos were not fast enough back then in my neck of the woods (Auckland!). My first few MMA fights I watched started off nonchalant. They started on their feet, and eventually went to ground, and when I had no understanding of that, it came across as boring. The first fight that really caught my attention was Benson Henderson vs Clay Guida. Getting 2 guys with crazy style and long hair throwing haymakers and trying to choke each other out was insane. The surprise of not having a 10-count when either one was rocked and the multiple attempts at choking each other definitely got me more interested in what the ground game can do to make a fight exciting.

After a few exciting fights watching it in awe, like a lot of competitor, I was drawn to the question of self analysis – ‘can I do that?’ I was an avid participant of a similar training style to crossfit at the time, and I was not too shabby in the fitness department. Watching the pace and intensity of a regular 5 minute round made me question if the fitness of even a crossfitter matches the fitness of a fighter. You see the fighters throwing punches and kicks, attempting take down after take down, battling through grueling cardio all while absorbing hits and trying to avoid being hit. I soon realized that I was not cut out for participation of the sport.

Watching more and more fights, sometimes the same fighter who looked like the fittest guy in a 5 round fight gets exhausted in 2 rounds of another fight. After asking many questions and annoying everyone around me, I realized from personal experience that even the fittest person on earth will empty half their gas tank when they absorb a clean liver shot to the gut. That is when I realized that there is more to swinging and brute that wins a fight. Each shot can be either used to slow you down or take you out. Not every punch needs to be swinging for the fences trying to put you away. Takedown attempts and being defensive on the ground is bloody exhausting! On top of that madness, during a fight, injuries are a real factor!

You see fighters who get injured during the fight then go on to no longer having one of their limbs to fight with. Examples are Jon Jones with the toe fracture against Chael Sonnen, or the infamous Suga Sean O’Malley’s foot injury. Also in the post fight interviews, you hear about how a fighter was injured during fight camp, and yet proceeded to fight anyway. The availability of each part of their body is crucial to the success of each round that eventually leads to the result. That was when a massive realization happened to me – Fighting is like a game of chess, and you want to be playing with a full line-up of pieces. Going into a fight unprepared or with an injury is like starting a chess game with missing pieces. You will lose pieces during the fight, but you got to find a way to compensate for the pieces you are missing and win with the pieces you have left

What are the common injuries you see with MMA fighters?

After working within the fight community for a while, it is hard to pinpoint any specific injury that happens more so than another. Every individual is different. Every fighter utilizes different skill-sets, different areas of advantages, and different body types. A lanky athlete with a background in kickboxing will have different injuries to a short stocky build fighter with a jiu-jitsu background. A southpaw will have different injuries to someone who is orthodox. I think it would be more common to associate the commonality of injuries with the amount of time spent in a certain discipline. Kickboxers tend to have wrist and shin injuries. Boxers have elbows and shoulders injuries. jiu-jitsu have hips and shoulders injuries, wrestlers have backs and neck injuries. This is not to say that other injuries do not occur,or that participants in that discipline will lead to those injuries. There are 2 predictors of injury regardless of sports; 1) a history of previous injury, and 2) weakness in the region. Time spent training in an area should get you stronger in that area, unless you have been compensating a weak muscle while performing a movement. This leads to overloading of a muscle and therefore an injury. Therefore, time spent doing an activity exposes the area of compensation and weakness rather than being a cause of injury.

“Rest does not mean stay home and stay away from training. It means we have to give the injured structure a break.”

What is the best way to prevent injuries in MMA?

Overall, we want to make sure that your body is as stable as possible. In a functional setting, your body cannot rely on any other structures for stability other than the joints and muscles you have in your body. 1 key point to note: with use, muscles get stronger, while joints get worn out. So which structure should you load more? Easy answer: use as much muscle as you can and reduce the use of joints for stability.

To simplify it, there are 2 jobs for your muscles; either for power, or for stability. And each muscle has a job it is better suited for. Power muscles are your big obvious ones, while stability ones are less obvious to spot. Stability is more important of the 2 to prevent injuries in MMA. An example, when doing a leg press, more people will find it easier to leg-press a heavier weight on a machine than they can squat. Factoring for body weight, the load is still greater on the press machine – because there is no need to stabilize the load while on the machine. However, doing a barbell squat, you are required to stabilize that load, which therefore reduces the amount of load you can carry. In MMA, you do not have machines to stabilize your load, but only the joints and muscles you have. So stability muscles are the key to prevention of injury.

What is the best way to immediately treat an injury in MMA (icing, heat etc)

The stock standard protocol to date is still RICER – Rest, Ice, Compression, Elevation, and Refer to a health professional. The most important one that is commonly neglected is the Rest component. It is the first letter for a reason. A lot of fool-hardy athletes train through injury or niggles. Rest does not mean stay home and stay away from training. It means we have to give the injured structure a break. You can still train in other ways that offload the injured structures; you will just need direction in doing so. Commonly the area that you are feeling pain in is not the only area you should be resting.

Elevation and compression is fairly straight forward. Even though ice is still part of the current first aid recommendations, a lot of practitioners have moved away from ice as an immediate treatment modality. Ice will do way less harm than other modalities for a pain-relieving effect; however, it could potentially delay healing, or potentially burn your skin if applied incorrectly.

The reason why R for Referral is also important: every injury is different, and every athlete has various vulnerabilities that they will need to address. The R will also tell you how to ice, or whether or not you should be icing. Avoiding the R and going to Google means you will be getting a generic advice that will most probably not be suited to you. When wanting to travel, what is worst than not making progress, is going in the opposite or wrong direction. Get steered in the right direction first.

How can you tell if an injury is minor or major?

Breaking a bone is pretty major. If you fall over during training with a loud bang or clearly cannot continue, that is pretty major. If it is a major, for the love of Diego ‘Lionheart’ Sanchez, please stop. Pain, however, is not a great predictor of how bad your injury is. For a lot of ligament sprains, a complete rupture has not much pain associated with it, and yet it will cause you the most amount of trouble. The worst thing you can do is say that an injury does not feel that bad, ignore it, and train through the discomfort. Even a minor injury can become a major. Remember above? There are 2 predictors of injuries; weakness and history of injury. Do not let a small injury become the history of a major one.

Where can fighters find more info on treating injuries?

Most coaches were once competitors themselves. A progressive coach will not judge you when you bring up that you have an injury or a pain. In contrary, they will guide you in the right direction by either assisting you as best as they can and they will refer you to someone who can help. No good coach will want to see their student in pain, discomfort, or risk them getting seriously hurt. Remember, stern and firm is different to abusive.

If you have any questions, please feel free to leave a comment in the comments section. If you want to see a physiotherapist to run through injury prevention with you, please do not hesitate to contact us via email. If you are local, one of our team will be able to help. Otherwise, let us point you in the direction of someone we know who can help you! 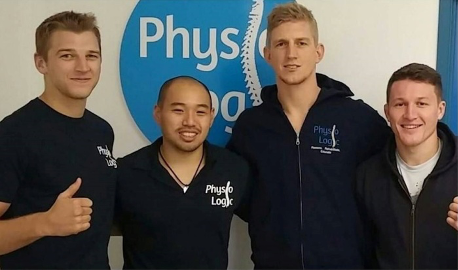 Shout out to Jamie ‘VDK’, today would have been his 30th birthday. If it was not for you, my physio journey would not be in the direction of combat sports. You would be proud of the boys and their accomplishments. Miss you brother. 1990-2015